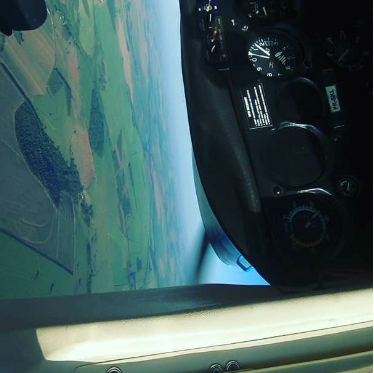 She pulled the yoke back and the plane started to climb, and without further explanation she smoothly pulled power. The engine idled back. I watched the airspeed indicator start to unwind. At about 50 knots the stall warning started squealing. I tried to brace for that awful break, when the plane lurched abruptly toward the ground.

I breathed in once, twice. The plane broke so fast it almost hurt: Free of its lift, unhinged, it twisted sideways, left wing dropping far beyond the vertical. In the same moment the tail seemed to be forcefully catapulted over the nose. I actually saw the earth through the top cabin windows, spinning, upside down, it’s horizon curve all kinds of wrong. My mouth opened wide and without willing it I shouted.

It was good I wasn’t controlling the plane when our trusty Cessna 152 Aerobat flipped its wig. I wanted to think all my reading about spin recovery would have saved us. But in the moment: No.

In that mad bucking tumble I began to hear my instructor’s remote and calm sounding voice. “One and a half, two, two and a half” — with a hard thunk of rudder pedal the plane stopped spinning, then pitched forward into a dive as she thrust the yoke toward the panel. There, the earth, where I did not want it to be, looming. Just as suddenly there was a deep g-force compression as she pulled back. My whole body jammed down into my seat like I was bottoming out on a 100 foot roller coaster drop.

The engine roared to life. And then we were simply flying straight and level again.

My instructor, Barb MacLeod, a brilliant meso-American anthropologist so fluent in ancient Mayan hieroglyphics that she helped create the dialog for the movie Apocalypto, looked at me and cackled.

“Let’s do it again”, she said. So once more she made the plane tumble into a crazy downard spin and the thing I heard the loudest was my own screaming.

Later, while trying to drive home, I couldn’t keep from speeding. Seventy in a fifty-five zone was not fast enough.

This was it, I thought. This thing I just did — that was it. Now I knew the razor’s edge — I had seen it from both sides. If Barb could do it, I thought, then so could I. In fact that’s why she’d showed me.

I remembered Barb’s crazed grin, her eyes looking at me with total glee, slightly magnified behind, large tinted bifocals. In retrospect I shared her bravery, and my body buzzed with adrenaline.

Even so a puny voice inside my head spoke angrily of my contorted agony in that moment of uncontrolled descent, the spin entry, my shout of horror, Barb hooting and then counting turns. The voice clarified into one like my mother’s: Have you have lost your ever-loving mind? You should know better than that. You could have been killed!

Above: Barb MacLeod pilots N4951A with then owner Max Bell in the right hand seat counting down altitude. Barb is counting the spins. That is Bergstrom Airbase below them before it became Austin Bergstrom International Airport