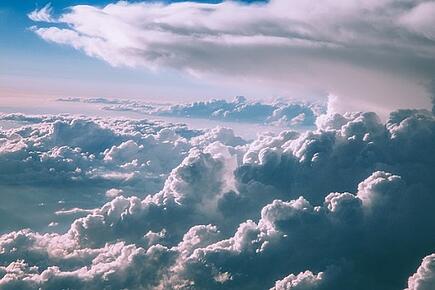 Imagine a golden age when you can fly on your own wings, soaring in all the seasons and at your whim into the deepest blue sky.

Just so: In a ship I have built with my own hands I will take in the beauty of the clouds. If once seen only from the ground as a child or as a helplessly cooped-up adult in a commercial airliner, now I will be the one sitting at the controls — I will be the one circling around small, puffing cumulous, watching the shapes change from one imagined creature to the next. And then pointing the nose down to swoop low over fields and waters, farm animals grazing, a bicyclist suddenly looking up, two children waving wildly — so close I could smell the trees and the grass and soil. From the air I’ve seen the gold of a setting sun below deep purple storm clouds, double rainbows arcing across the heavens. Landing at dusk, the airfield glitters beautiful colored lights. I love landing when the sun is going down. When you do it just right, the runway angles correctly and slowly gets bigger and bigger. The closer you get, the faster it gets bigger. And it’s no illusion either: In unaccelerated flight it is not provable from inside my cockpit whether I am moving down towards the runway or it is moving up towards me.

When I was 59 years old I privately doubted that I’d yet done anything at all I could consider truly exceptional. What had I done with my life? Nothing.

That bitter thought instantly made me feel guilty. After all I had loved and had been loved. I had traveled; I had been married and created new life from the void; I had been divorced; then gotten married again. Above all I was raising two beautiful children. We are supposed to believe those things are everything and everything else is nothing. But I featured the opposite.

At one time I had ambition to be a fiction writer, but as soon as I had a few stories published I gave up. It was incredibly hard work for me. Coming out of a university class early in my obsession I fell in behind two creative writing teachers. They were discussing another student, whom I will call “X”. I walked faster to eavesdrop. One of the teachers turned to the other and said “Isn’t X amazing?” “Yes,” said the other teacher. “X has incredible talent. A standout in every way. He has a big future if he keeps it up.”

I looked up X and found out that while I was barely making “B”s in creative writing, X had already been published in The Paris Review. My writing was so aggressively bad that one teacher wouldn’t even discuss it with me. “How about those Cowboys?” he’d say, when I walked into his office.

I was hardly incredible talent. When a puny few acceptance letters finally trickled into my special Great-American-Writer PO Box I felt absolutely nothing.

One of the editors noted: “Congratulations. I didn’t think you had it in you.”

I remembered: My grandfather was lying in a hospital bed in Woodward Oklahoma. It was a very cold, dreary evening in early November. He was near the end, and my father took me in to see him. Though essentially motionless, my grandfather did lift his head and smile when he saw me come in. But he lowered it immediately back to the pillow and closed his eyes.

During my short visit we talked only a little. I asked him a few questions. He ignored them. But he seemed to come alive suddenly when I told him I’d been playing little league football. Again he opened his eyes. He said loudly that had been a football star. That he had scored a game-winning last-moment touchdown in a high school championship football game. The stands had erupted in cheers. That night the whole town celebrated him as hero. Everyone got drunk. He had girls on each arm.

“It was the most exciting moment of my life”, he said.

I asked him a few more questions when he finished talking about the touchdown. But he didn’t answer any of them. He was no longer animated, he just looked ill. Soon he seemed to have fallen asleep. My dad led me out of the room and took me back to my grandfather’s house where we were temporarily staying. The next day my mom and I got in the family station wagon and started the long drive back to Denver.

Thanksgiving night I was in my parent’s room. My mom was reading a story to me; my dad was still down in Woodward. The phone rang and my mom picked up. “Uh huh. Okay. I see. All right. Well, I’m sorry. I love you.” She hung up and turned to me.

“Your grandpa is dead.”